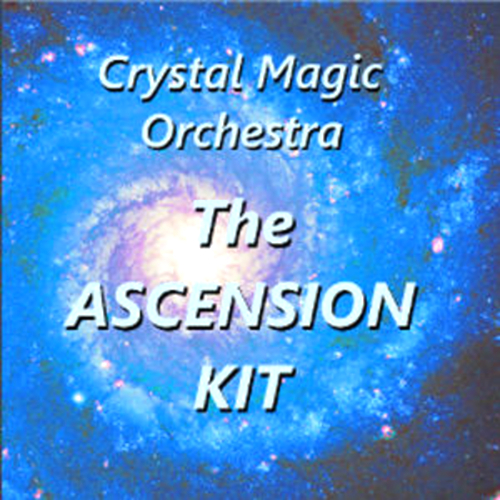 
4  Albums  - Containing Codes and Frequency of DNA Activation given by the ELOHIM ANGELS.

It comes with THE ASCENSION KIT MANUAL to tell you how to accomplish it.

Ascension Vortal, Ascension Vortex, Ascension Portal, and Magic Vortal which have the highest frequencies from the Cosmic, Universal and Galactic that align one with the Cosmos and the divine template.

Four Sets of DNA Frequency Activation CODES given from the
Ascension Team Cosmic Councils as the God Language Codes for our
Corrected DNA activation.Manifestation Merkaba

The God Language Codes of DNA Activation are infusing through
the Universal Merkaba that holds the activation from
all 12 Parallel Spiritual Universe in ATTUNEMENT with the new body template.


Ascension Vortal
Children need to be allowed to remember that they came from the Planes of Immortal Light where Divine Harmony was the key to existence, and creating with the Divine Activity of Divine Love was the desired profession. It is time for children to know about their real genetic structure that is engraved in the DNA of our cosmic consciousness. It is the breath of Cosmic Consciousness from the co-creative angels that is recorded here. This is the breath that re-activates the memory of the 12 DNA, activated through the Cosmic 48 DNA.


Ascension Vortex
There are millions and millions of Entities of Light included on every dimension working together on every little project and as a part of larger projects. Our Consciousness is also made up of thousands of Entities. We have been separated from our selves on this dimension and all of the other dimensions. Soon, this year, our selves will re-unite. We will begin to remember who we really are. This is the process of Illumination. We will become reconnected to Starry Brothers, our Galactic Families.
These are the codes and  breaths of consciousness that re-activates the memory of the 12 DNA and  24 DNA of the Immortality Template. This template  contains Instant Manifestation, Instant Healing, and Eternal Life are found in these templates.


Ascension Portal
Each of these songs in the ASCENSION PORTAL ALBUM contain parts of the formulas, codes and frequencies of the process of ascension. The formulas are layered to include all of the codes and alignments needed during different stages in the ascension process. This particular album focuses on the formulas of co-creation, which is the foundation of all manifestation.


Magic Vortal
These wave files raise Frequencies into the 48 DNA activation to a level where you become a harmonic convergence into the grand Aquarian motif. We sing the cosmic symphony of evolution through our breaths of consciousness. As we harmonically align with the Cosmic Breaths of Consciousness our entire cellular structure sings in harmony, and becomes completely transmuted into this Cosmic Symphony. We each contain a melody of fraternal essence and our angelic co-creative consciousness. The co-creative consciousness of the Immortal Man will begin to manifest the reality of the Island of Light that he breathes into his new existence.


There are four ASCENSION KIT 4 MP3 ALBUMS listening samples in the Music Player to the left.  Click on the Play button to hear them.